I just got my hands on my Gemini yesterday. I have been looking forward to this campaign delivering for over a year (I was so excited I managed to be backer #5). It’s a spiritual successor to the Psion devices I grew up with and that makes it a must have for me - even if my ultraportable Mac and iPhone have seemingly eroded any real need. So here are my first thoughts on the Pocket Computers Gemini.

The elephant in the room?

A lot of the campaign backers seemed surprised and confused by the form factor. It uses mobile phone hardware and so technically can make phone calls (if you get the 4G edition). But it’s true parentage is the palmtop. It’s a clamshell, a teeny tiny ARM laptop. But people have been horrified you can’t see caller ID without opening it and that there isn’t a 32MP super camera slapped on the front.

Personally even if the Gemini was perfect and the software was complete it probably wouldn’t ever be my ‘daily driver’ mobile phone. But it might mean I stopped carrying my laptop around to meetings.

It was very well packaged. Almost Apple level. The hinge mechanism on the box has a magnetic lock so its easy to open but also closes securely. The only thing that went wrong was Hermes - as you might expect - played football with it damaging one corner. Luckily the hardware itself survived. 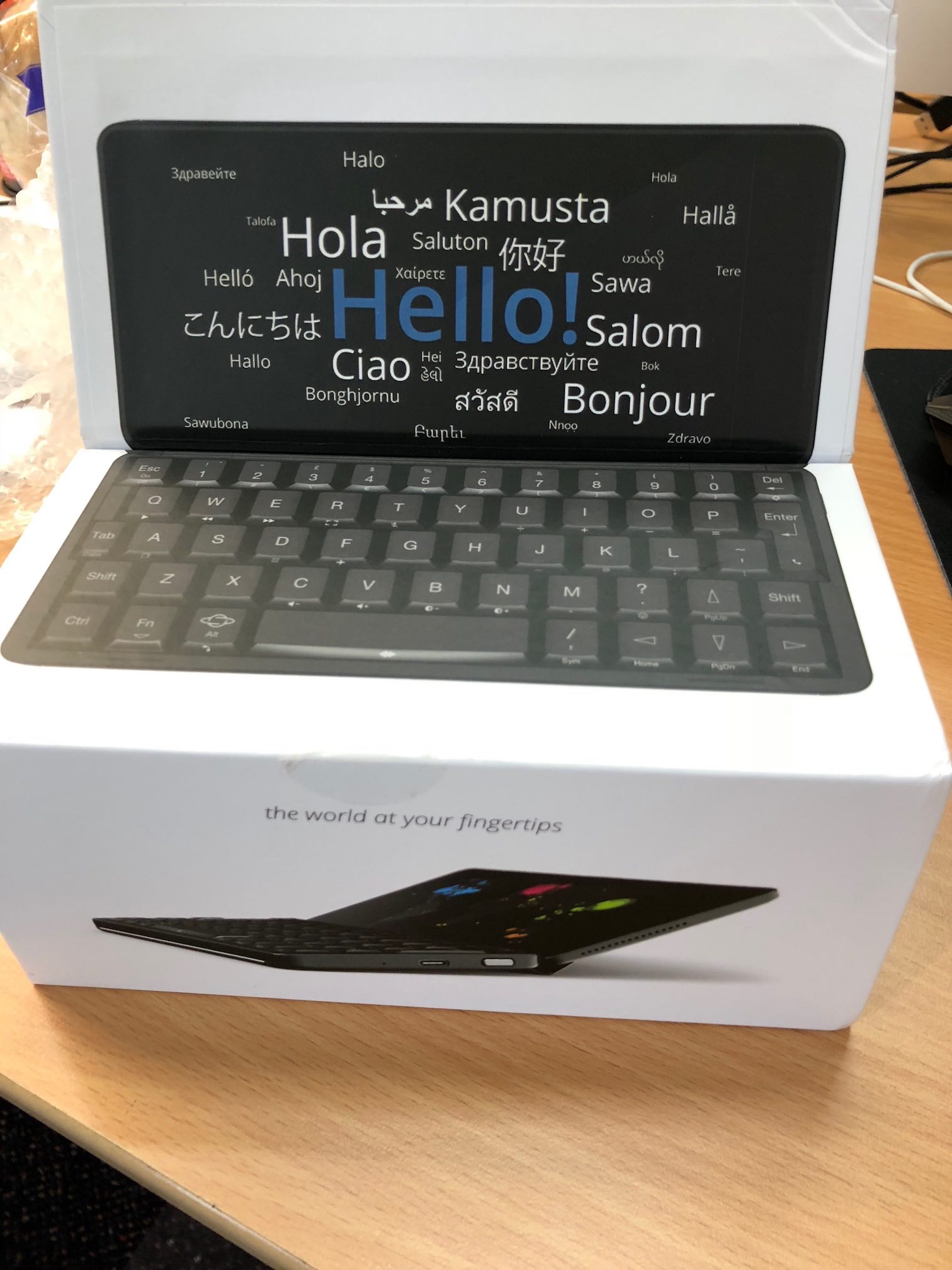 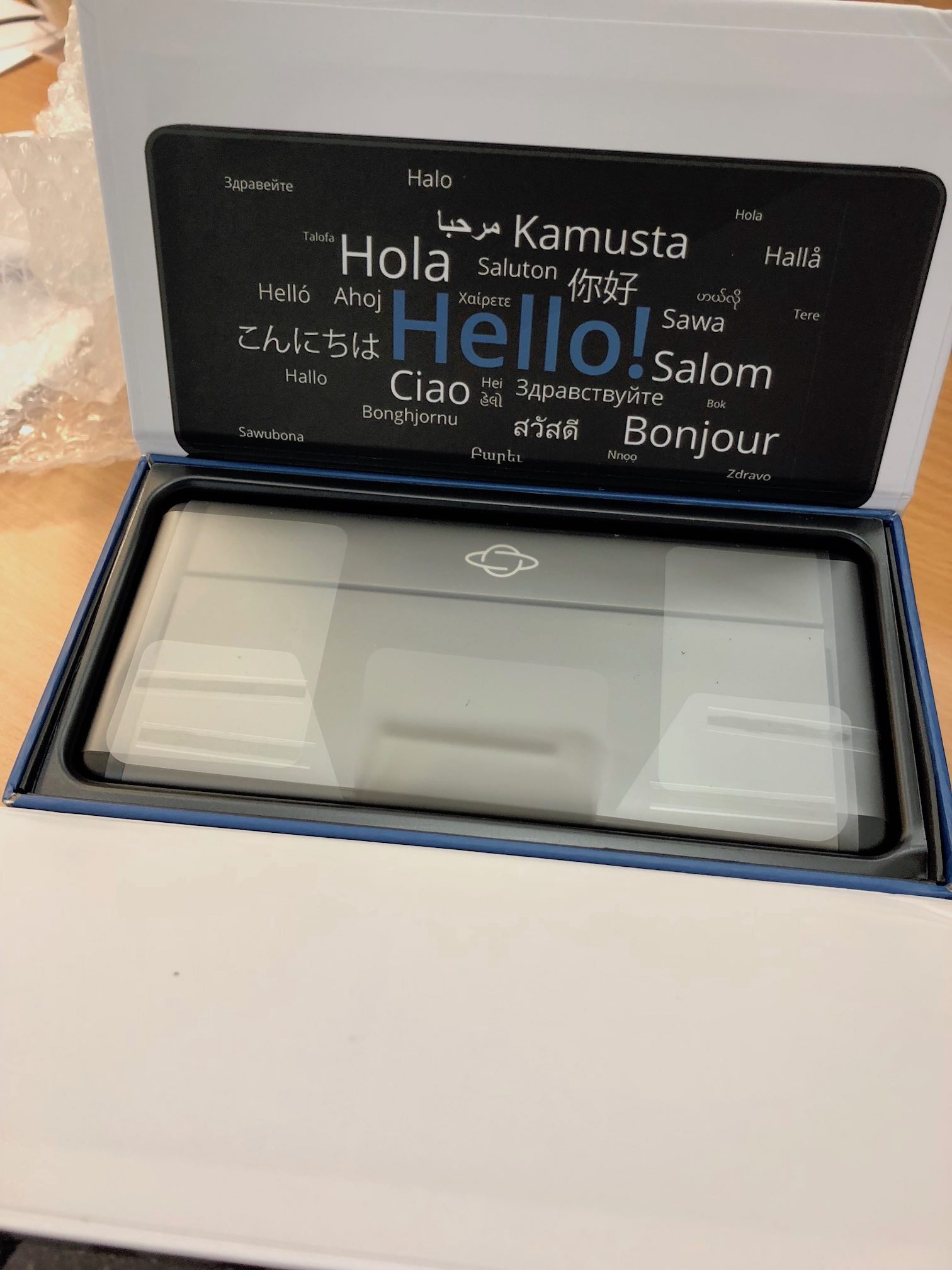 The screen itself has a screen protector. It was so well applied I didn’t notice it at first. With it on the touch screen worked well but had a weird texture to it. Eventually i noticed a hole in it and removed it - this was surprisingly hard work. I can’t decide whether the screen protector was supposed to stay on and mine was defective or whether they need to work on making it easier to remove.

I tend to have realistic expectations with crowdfunding campaigns. This is a small team and whilst they have an ok budget they have a tight deadline and very very demanding backers. There is so much that the team has had to pull together to get here. In this context the hardware has blown me away. It is far better than I ever expected. 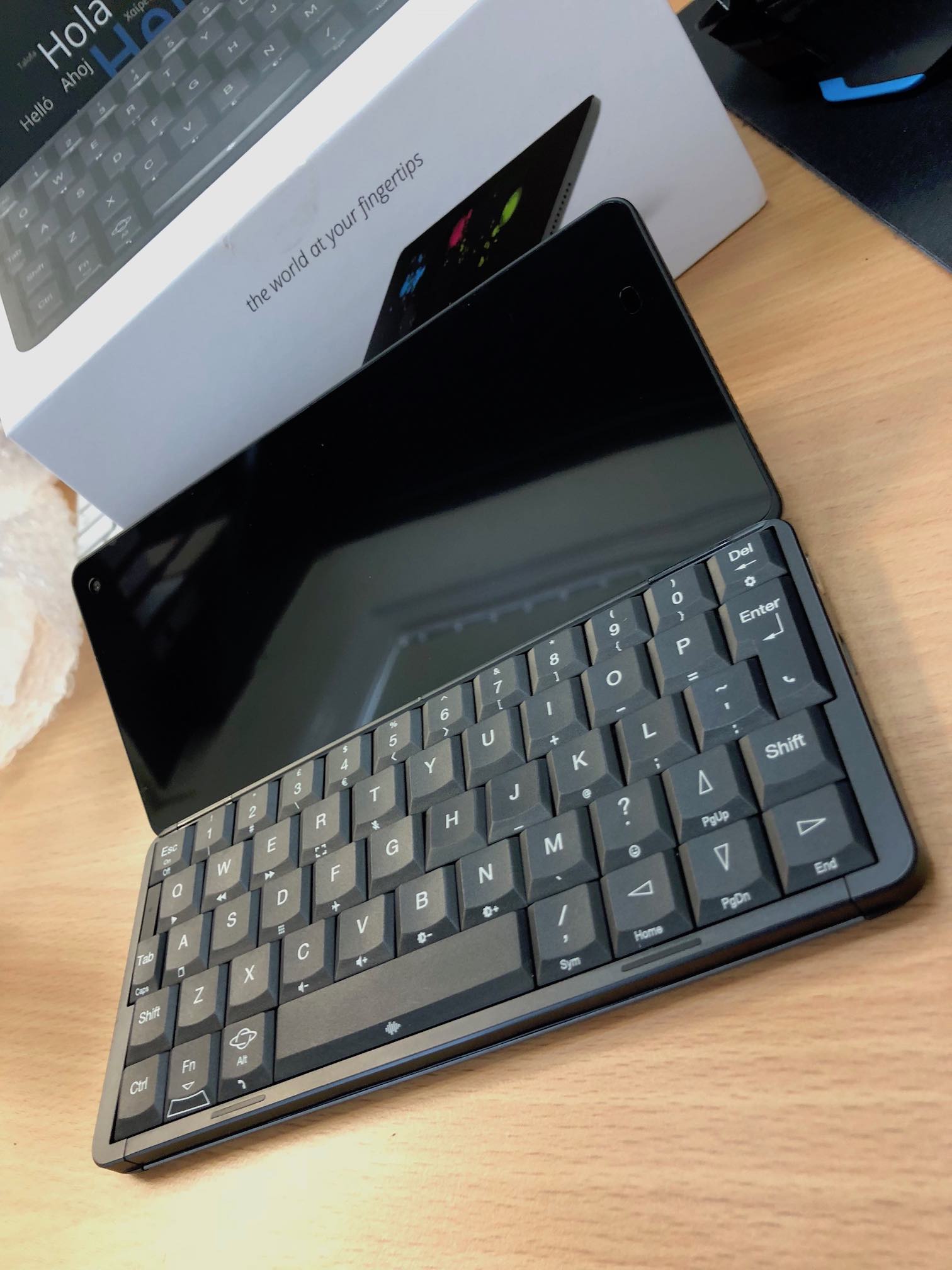 My Gemini feels solid and doesn’t have that ‘cheap android’ feel to it that i’e come to expect from most phone manufacturers. It’s got a satisfying weight to it and is well made.

The keyboard might not be to everyones taste but my initial feedback is well done Planet Computers. I’ve been typing on it for less than an hour and i’ve already got a decent typing speed on it. I wrote this blog post on it and other than occasionally wondering where a symbol was hiding I did not find myself pining for a full size keyboard at all.

The screen is lovely. The size is weird, and on top of that there is the odd alignment that I thought might be upsetting. But really I barely notice, I’m fine with it.

The LEDs on the outside are cute and I hope they stay in the next revision but so far I don’t have a practical use for them.

Charging only works on the left hand side. I used it with a USB-A Anker charger and it charged just fine. Apparently the USB-C chargers might be problematic but I can’t confirm this (thanks mediatek).

I used a USB A-C adaptor and tried using a mouse. It worked just fine.

I’ve not had it long enough to get a feel for battery life yet.

The stock software is Android. I’m struggling so far to rationalise whether things that frustrate me are just Android (i’m an Apple fanboy) or genuine rough edges that need fixes. I haven’t tried any other OS yet.

The Gemini boot graphics are gorgeous. I’m almost sad that I won’t see them very often. 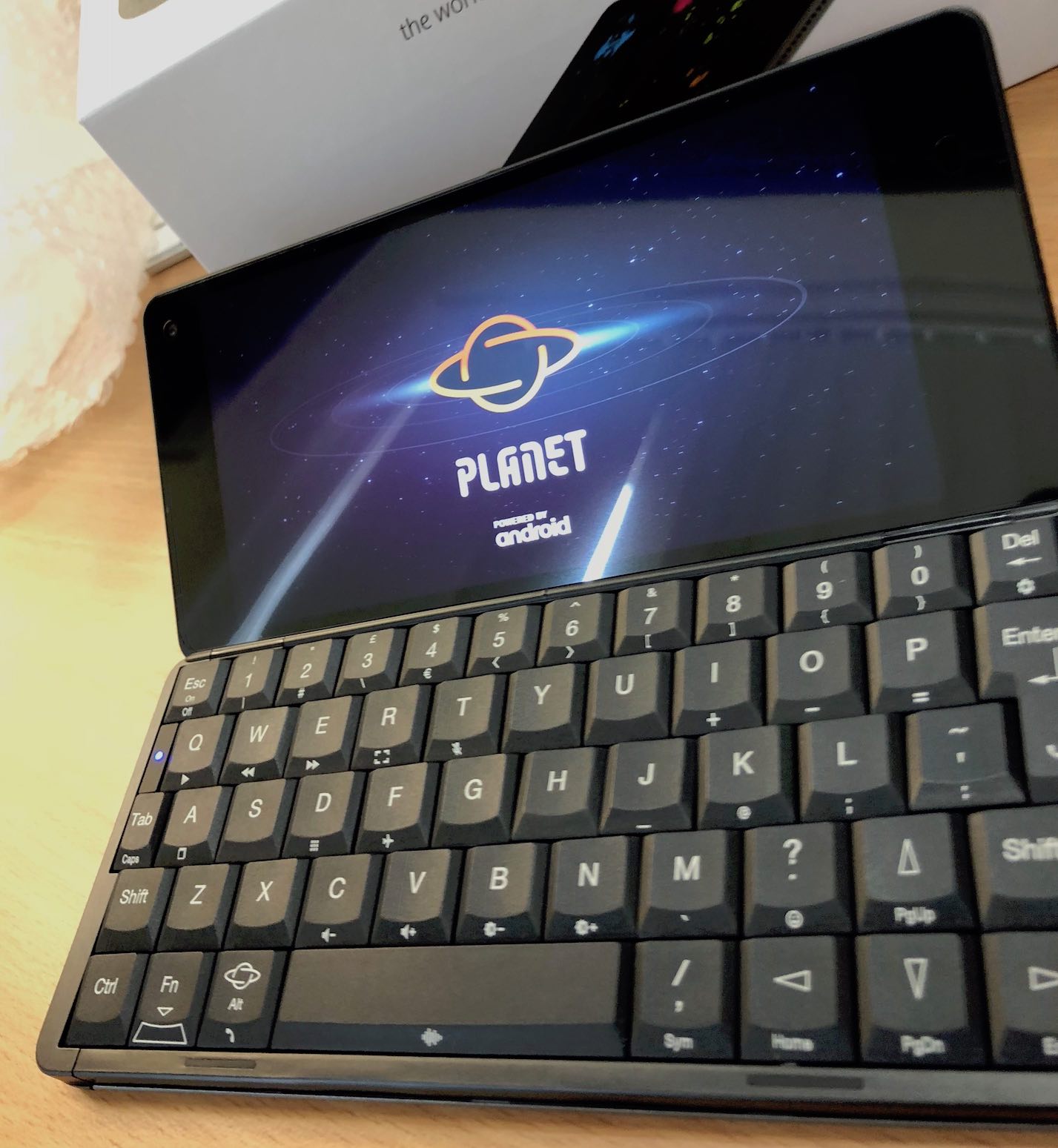 The initial setup was buggy. The biggest issue was just that Android really didn’t like being landscape.

I’m used to a single home button (and now 0 buttons on the iPhone X) so the ever present trio of buttons on the right hand side is annoying. I hope they can go away and be replaced by physical buttons / gemini app bar buttons.

The Gemini launcher is a great compromise at delivering the physical launcher that we had on Psion devices. 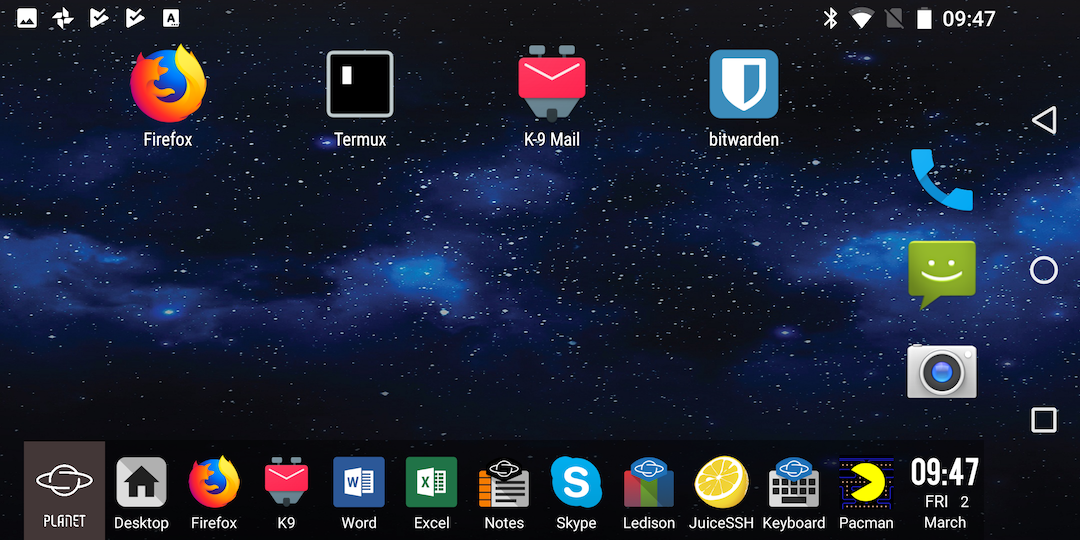 I haven’t figured out how to de-google things yet. Hopefully I can remove the google search window and chrome itself. 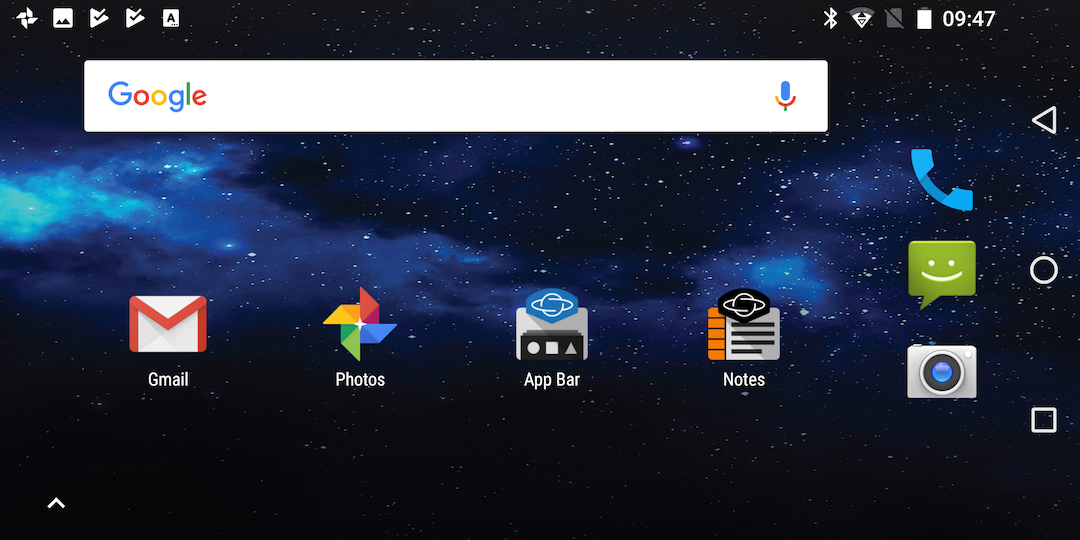 Some of the Gemini specific components like the updater are clearly still work in progress, but so far they do not fit in well with the rest of the device. 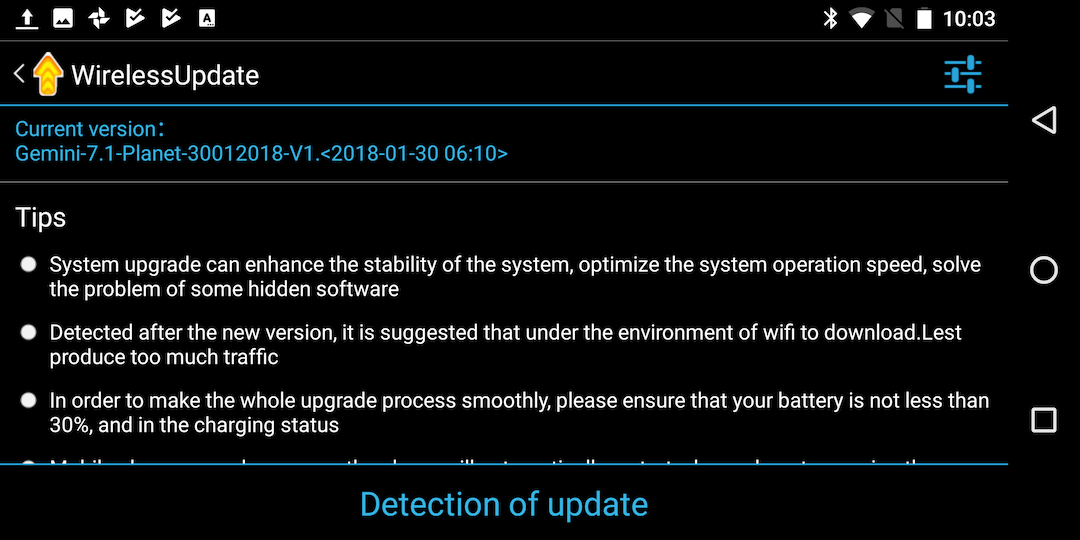 Love it, despite the rough edges.

The hardware is pretty fantastic really. There are definitely things i’d ask for in v2 (bigger screen, less bezel!) but what is there is great.

The software is clearly still being built. I wouldn’t tell non-techies to get one. But it has definitely found a place in my ‘everyday carry’.

I’d love to see a device like this running GNOME and working with GNOME Builder.